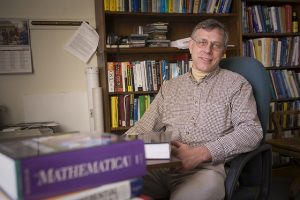 Unlike staff member Vicki Miller, who only last year was inspired to begin participating in the United Way campaign after one decade at the College, Rob Root can’t remember how long ago he started pledging to United Way—and he’s been here nearly 30 years!

“I have always appreciated the United Way solution to charitable giving,” says Root, professor of mathematics and clerk of the faculty. “By giving to United Way, you’re taking care of seniors, kids, all of the people in our community who really need help.”

“It’s always been a disappointment to me that Planned Parenthood is seen as controversial; what’s debatable about wanting to support women’s health?” Root asks. “Planned Parenthood plays a really important part in looking after the health of the women in our community. That matters to me, and so I make a point of supporting them. And every year I get emails and letters of thanks from them.”

So why not just contribute directly to Planned Parenthood instead of giving through United Way?

“I’m not going to stop anybody from giving money directly to Planned Parenthood,” Root responds. “But to me it’s worth a very little bit of overhead to have United Way out there looking for the most worthy organizations that care for the many different constituencies in our society that need help. United Way makes sure my money is used effectively, and I appreciate that.”